Brown Hill's General Store - 'back in the day'

When it opened the shop was named 'Wm. Lane, Temperance Store'. The term 'temperance' meant there was no alcohol sold at the shop. From 1932 the general store, supplying household goods, was run by Ed’s parents. Most of the supplied goods came in large tins. Grains and meal came in hessian bags. The shop sold fruit and vegetables, groceries, chook food, wheat, bran, pollard, newspapers, briquettes and some crockery. The shop had rows and rows of tins stacked in shelves, mostly tins of biscuits of all different varieties. 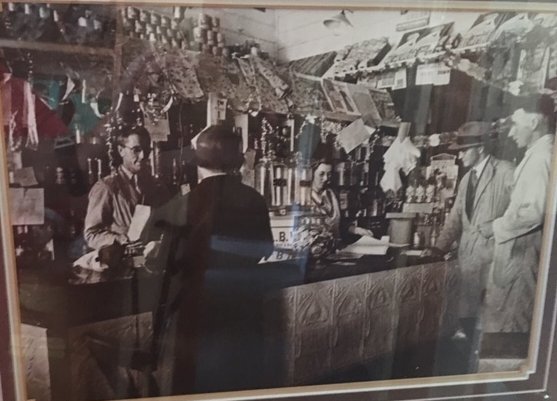 The interior of the shop with Bill and Mary Bawden at the counter, taken possibly in late 1935. Christmas decorations frame the large timber counter, decoratively adorned with an intricate pressed metal panel on the front, matching the pressed metal ceiling. Image supplied.

During the 1940s there was a petrol bowser with two hoses at the front of the shop.The shop sold locally made biscuits. The huge 'Sunshine' biscuit factory was located between Victoria and Mair streets, where the Bakery Hill Shopping Centre is now. The biscuit factories were big employers of people from the community. Soft drinks, mainly lemonade,came in glass bottles.'Goodfellows' and 'Rowlands' were producers.

The business became known as 'W and E Bawden Service Grocers', run by Ed and his father William. School children from nearby Brown Hill Primary School would spend threepence on their way home. Threepence would buy a small bag of lollies.

During the mid-60s Ed and Joy took over the running of the shop and renamed it 'E. & J. Bawden Service Grocers'. They lived in the house behind the shop with their four children. Each week the shop was open for five-and-a-half days, closing at lunchtime on Saturdays. Ed and Joy say, "They were long days in the store, with our mornings beginning at 5.30 am to collect the newspapers and roll them, then do the home delivery, some thrown from the van, some from a bicycle. Customers enjoyed reading the news with their breakfast.The shop was open all day and then, after closing, the van was packed with boxes of goods and home delivery service began. 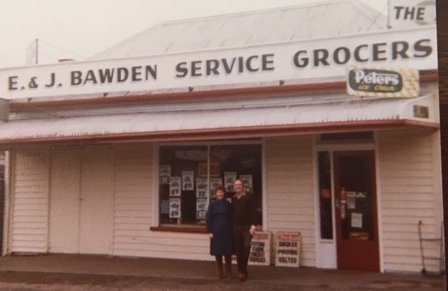 Axe handles and broom handles stood in a re-used drum at the door. There was a local man who was a regular at the shop. One day he took an axe handle out of the drum and began waving it at anyone who approached the shop. Ed’s father, Bill, came out, put an arm around his shoulders and walked him home, a few doors up the street.

As they became old enough, the Bawden children helped in the shop. They bagged lollies to sell and helped with the newspapers in the mornings. They enjoyed the regular supply of treats, particularly the Chocolate Royals. One time, after they had been indulging in the Chocolate Royals, Ed noticed that they had moved the stack to make it less noticeable that some were missing. Hmmm, that didn’t work!

In later years, Ed and Joy provided school lunches for Brown Hill Primary School (before it merged with Queen Street Primary School and was re-named as Caledonian Primary School). Lunches were delivered to school each day for many years.

Mrs Margaret Wilkins helped in the shop for many years and is fondly remembered by the family.

The Bawdens sold the business and the home in October 1983. 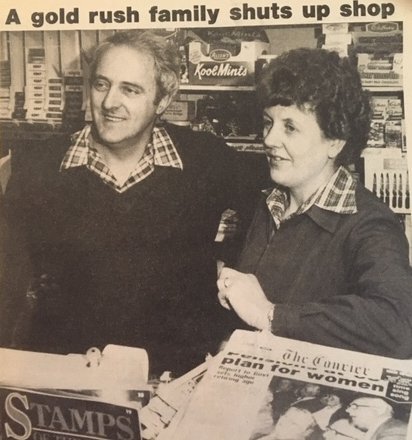 It is quite unusual that so many generations of one family lived in and operated this shop over many decades. Ed and Joy still value their memories of customers and events during their time at the shop. They are grateful for the support and ongoing friendships developed as a result of being a pivotal part of the local community.