In the Brown Hill Community Newsletter, we have profiled some of the many interesting people who call Brown Hill home. Here are a few of their stories.

The Bard of Brown Hill

Have you ever wondered about being a poet? Do you remember poems you wrote or read at school? I would like to introduce you to a real live local poet, Michael Heald.

Recently, on a Sunday afternoon, I sat with Michael in his sunny dining room in Brown Hill on the banks of the Yarrowee River where he has lived since 2001. I talked with Michael about his profession; he is a Poet and a University teacher of literature and poetry at Melbourne University.

Michael has had four books of poetry published and has been shortlisted for the Western Australian Premier’s Book Award (2004) as well as the Queensland Premier’s Award (2005). Michael’s latest book, 'The Moving World', published in 2011, was met with critical acclaim and is described by the eminent poet Robert Gray as ‘a daring and triumphant project’.

Michael has come a long way from his beginnings in Grimsby, England. When he was twelve years old, he relocated with his parents as 'ten pound Poms' from the grey/green environs of the Humber River to reside on the bright blue/green banks of the Swan River in Perth. Michael moved to Brown Hill in 2001, following his heart across the Nullarbor.

Michael is embedded in his natural local environment, despite commuting to Melbourne four days each week for work. He gains inspiration for his life and his poetry from his environs, as can be seen in the poem below about our own Yarrowee River.

Michael is an appreciative reader of the Brown Hill Community Newsletter and values being connected to his community. He has generously agreed to accept the title ‘Bard of Brown Hill’ and become a regular contributor to the newsletter. In the truest sense of the title he is our Resident Poet. I will be exploring with Michael in future newsletters his journey from young English boy in a new bright country to acclaimed Australian poet and teacher.

In the quiet of early morning,
birds are speaking
the language of water.

It can hardly be said
that I live by the river: it passes
almost as close behind my house
as the road does in front,
but a few more houses
stand in-between, keeping
a wedge of suburbia
between me and its slender,
dam-enfeebled, ancient flow,

though if I’d woken here
just a few lifetimes ago,
all of this land our blocks
have been carved from
would have been the river’s:
the unfenced ground gently sloping
and softening to its banks,
polished here and there
to the sky’s brightness,
and the trees reverently shrouding
its pure, supple nakedness.

Carried half a world by a tide of migration
from the Humber's banks of gleaming mud
and deposited on the dazzling sands
of the deep blue Swan, then tumbled
across this continent by the currents
modernity told me it was proper
to abandon myself to, my head
rests on the pillow here now,
by the Yarrowee, like a river-stone
through which the water-birds' carolling
resonates as their praise,
and as my longing
for the river-world back.

To find out more, see: https://fremantlepress.com.au/contributors/michael-heald

This article first appeared in Edition 20 of the Brown Hill Community Newsletter.

On 5 February 2018, the Preps started at Caledonian Primary School. Ivy said that she enjoyed her first day at Caledonian and she especially enjoyed meeting her friends.

What is your favourite thing so far?

Just outside my classroom there is a place called 'Developmental Play'. In Developmental Play, there are lots of areas to play in, like the Crafting Area, Lego Area, School Area, and many more, but my favourite area is the Sensory Area where I can touch and play with what’s on the table.

I really liked my first day of school because it was really fun. I think that school will be really fun in the future as well. I think that I will really like reading and writing. My buddy showed me around the school and I think she is very nice.

What did you do at play time?

At recess and lunch plays, my older brother Hugh likes to check up on me. I have made many friends at school. We like to play in the playground and my buddy likes to play with me. My favourite thing to do in the playground is to go on the bumpy slide.

"Hello I’m Mabel and we have a pup called Chloe. She is a 12-week-oĺd French Poodle."

That was the beginning of my quick chat with my five-year-old neighbour who has just started in Prep at St. Francis Xavier Primary School in Ballarat East (Villa Maria).

"I sit next to my new best friend Emily. The most special thing on my first day of school was having my school photo taken. We have many animals at my school; an outside duck who is “the postman”, chickens and three goats." A first for a Ballarat school, I’m sure!

Mabel said, "We play footy at recess times up on the top oval or play in the sandpatch."

When asked what was in her lunch box, Mabel reported, "A carrot muffin and a cheese and bacon roll. Also, my favourite fruits which are watermelon and bananas (but don’t eat too many or you will be sick)."

Mabel told me, "We do fun stuff with Ms Conroy, my nice teacher. Art and making a book to take home and read. Can I read to you Brian?"

So the journey begins... 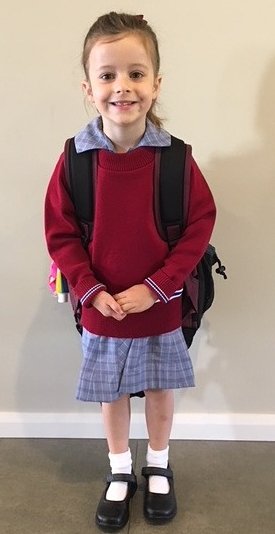