Caledonian Primary School student, Jovie, has had a stellar AFL season this year. Ten-year-old Jovie has finished her third season playing football on a high, taking out several awards, both in the league and in her club, the East Point Dragons.

On the AFL Goldfields Junior Girls' Football awards night, Jovie was named the 'Rising Star' in both the Ballarat and Riddell divisions. Jovie was also named on the 'Team of the Year', where twenty-three girls out of around two hundred and sixty were given the honour.

For her club, Jovie took out the Under-13 'Best and Fairest' award and, once again, was placed on the midfield in the 'Team of the Year'.

Jovie is a dynamic midfield player, who is well known for getting the ball out of the pack and her quick snap at goal. She has kicked nine goals this season, the second highest in her team.

Jovie looks to have a bright future, and wishes to become an AFLW player for Richmond Football Club when she is old enough. 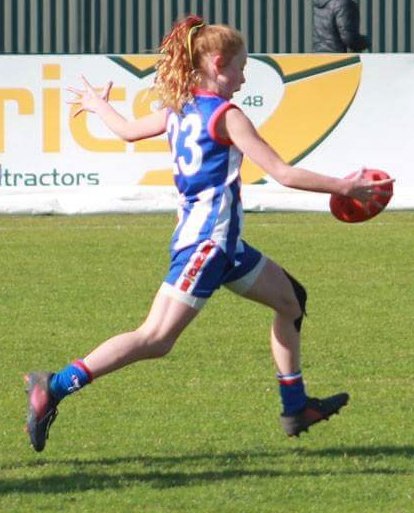